I broke this Ubuntu install when trying to replace grub with burg :( I’ve been wanting to try out distros like Meego, ChromeOS or even Android. I will post if I manage to get something work.

Tried a recent version of Splashtop but that doesn’t go past the splash screen. My general recommendation is not to buy this and go for something with full Linux support - netbooks/notebooks from system76 for example. If you have bought this, then read on!

The Vaio VPCP11Z9E has the form factor of a netbook and is extremely light (600g approx) but has features not normally found in a netbook - WWAN, GPS etc., Here is a rundown of the specifications

The Ubuntu desktop live cd iso can be downloaded from here. The same page has instructions on how to use the downloaded iso.

Check Step 2 Burn your CD or create a USB drive

Once the live system was running, I did the installation from there.

Here are some screenshots

/dev/sdb was my USB drive. Selected ‘No’.

Before configuration, it is essential to boot to Windows 7 and activate all wireless related functions. This can be done from the network applet in system tray. I came to know about this from some forum posts and don’t understand why this is the case! For example, if bluetooth is switched off on Windows, bluetooth functionality is disabled in Ubuntu. 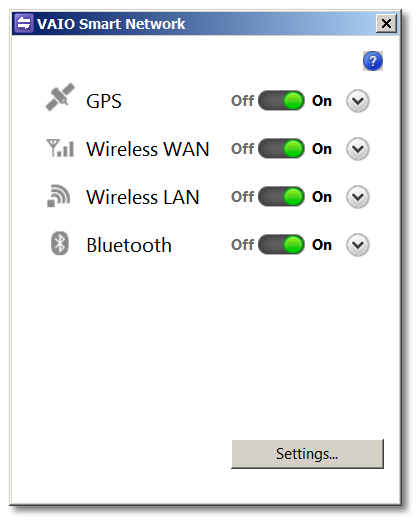 The Intel Poulsbo drivers were not installed during the installation process and need to be installed separately. Without this, the response was slow though the screen resolution was at maximum. I followed instructions from the Ubuntu wiki to get Intel drivers installed. To summarize what I did here.

Reboot to use the new drivers.

This is the only major issue I have at the moment. There is no sound through the built-in speakers. It works when I connect the headset that came with the system. Microphone works too. I tested this by making a Skype test call.

Worked. Just needed to select the access point and specify the passphrase. Got connected immediately.

Paired my Motorola Milestone and could send and receive files.

Paired a Jabra BT3030 stereo headset and could route audio to it. I had to select the device in the Output tab of ‘Sound Preferences’

The sound wasn’t great at first as it was using “Telephony Duplex (HSP/HFP)” profile for the headset. Changing this to “High Fidelity Playback (A2DP)” for a better quality audio. 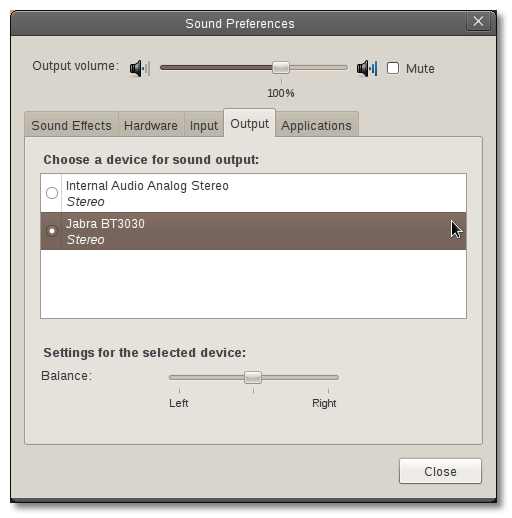 SIM from a 3G modem can be inserted into a dedicated slot which can be accessed after removing the battery pack. The device then appears in Network Manager and a connection can be setup. It still needs the wireless switch to be left “On” to work. 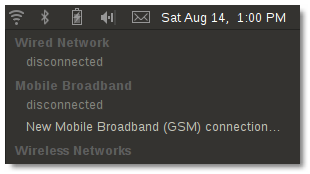 Appears to work as I could take a photo but then there is no display either in Skype or Cheese which I used for testing.

Trackball and touchpad on the sides of the display§

Both work now. Thanks to Alex (see comments). Add:

to GRUB_CMDLINE_LINUX_DEFAULT in /etc/default/grub and do an:

I could easily find and install most of the software I needed using the ‘Synaptic Package Manager’.  I also installed Boxee and Google Chrome by downloading the deb packages from the respective websites.

Here is a video I took which might give an idea about the performance of the laptop. First, I tried playing a youtube HD video. Playback is fine but no video is displayed in fullscreen which I tried towards the end of the playback. This could be an issue with Flash as VLC and Boxee work fine in full screen. Then I opened Gimp and loaded a 1.3mb file. This is followed by launching OpenOffice, Firefox and Chrome.

If you have any questions or comments on this post, please send them by email to vimal (at) disroot (dot) org.

If you would like your comment to remain anonymous, please state that in your email. In any case, your email address will not be published.